What is ion exchange?

In its purest form, water is made from simple molecules consisting of one oxygen and two hydrogen atoms. However, all sources of water contain impurities, some are suspended matter and others are dissolved. While Envirogen’s filtration technologies target and remove insoluble, suspended elements, our ion exchange technologies target and replace charged, ionised, dissolved salts.

Ion exchange is the process by which problematic dissolved ions in water, such as calcium (Ca++), magnesium (Mg++), chloride (Cl-) and nitrate (NO3-), are exchanged for less problematic ions, such as sodium (Na+), hydrogen (H+) and hydroxide (OH-). This process can strip out scale-forming ions and those that might cause issues with industrial processes. Due to the charge carried by dissolved ions, conductivity is a useful measure of the level of ions in water.

How does ion exchange in water treatment work?

At the centre of all ion exchange technologies are polymer beads arranged in a resin bed. Each porous bead measures around 0.6mm in diameter and contains permanently fixed ions of a particular type with a particular charge. Each permanent ion has a mobile counterion of the opposite charge that maintains neutrality within the resin bed. This counterion can exit the bead structure and be interchanged with other ions, thereby driving the ion exchange process.

As water passes through the resin beds at pressure, the dissolved ions can penetrate the porous bead structure. The heavier, more challenging ions are swapped for the lighter mobile ions and are maintained within the structure of the bead. The lighter ions then exit the resin bed in the water stream. This process can be referred to as water softening or demineralisation/deionisation, depending on the ions exchanged and the mobile counterions used in the resin bed.

The capacity of an ion exchange system is limited by its design and the number of exchange sites available on each bead. Resins aren’t single-use media so periodic regeneration happens once the beds are exhausted.

We offer a range of modular and bespoke ion exchange solutions to meet your exact water treatment needs.

Industrial water softening technology deals with scale-forming ions that are positively charged. For this reason, a single-stage cation resin is used to capture and exchange sparingly soluble, scale-forming ions, such as Ca++ and Mg++, for less problematic Na+ ions. 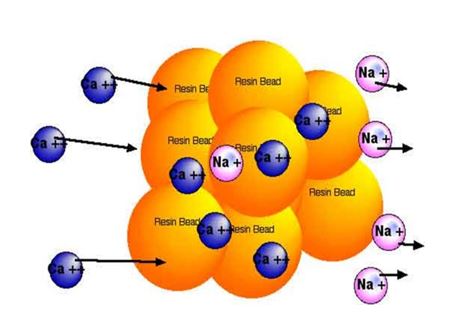 Resin beds have a limited capacity and once the ion exchange sites are saturated, regeneration needs to take place. This regeneration process enables repeated use of the same resin beds, delivering a low total cost of ownership.

To regenerate an ion exchange water softener, a brine solution, rich in Na+ ions, is introduced to reverse the process and drive the scale-forming Ca++ and Mg++ ions into a waste stream. 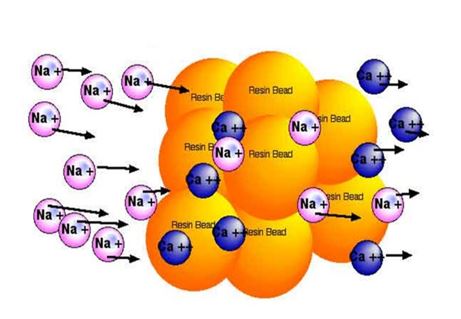 Our EcoSave range features a packed bed design and delivers high flow rates for the most demanding applications, delivering softened water streams of up to 50m³ per hour. With its innovative counter-current regeneration technology and advanced conductivity sensors, EcoSave prevents over rinsing during the regeneration process. This makes EcoSave the most efficient industrial water softening technology on the market, using 60% less salt and creating 80% less effluent than a conventional system.

Our EcoSoft ion exchange water softeners provide flow rates of between 0.4m³ per hour to 20m³ per hour and are based on a downflow regeneration design. EcoSoft has a multi-port valve for servicing and regeneration activities and can be installed in both simplex and duplex configurations for 24-hour flow.

H+ ions are held least tightly by a cation exchanger, therefore, all the other cations in the water will tend to exchange with the H+ ions on the resin. The water leaving the ion exchanger will contain practically no cations, except H+ ions. The anions will, of course, have remained unchanged so the water will be markedly acid.

If this acidic water is now passed over an anion exchanger with mobile hydroxyl (OH-) ions, the anions in the water will tend to enter the resin in exchange for the less tightly held OH- ions.

At the end of the process, if all the salts are taken up by the ion exchanger, all the H+ and OH- ions from the resin recombine as water (allowing for the permitted concentration of H+ and OH- ions).

The dissolved salts within the feedwater have therefore been exchanged for an equivalent amount of water and the water is now demineralised.

The regeneration process for demineralisation technology is similar to that for industrial water softening systems but requires two chemicals to restore both the cation and anion resins. Positively charged ions are removed and replaced with H+ ions, usually through the use of hydrochloric acid. Caustic solutions are used to replace negative ions with OH- ions.

Once regeneration is complete, the resin beds are placed back into service for the next batch process.

EcoDI provides cost-effective demineralisation/deionisation for small to medium water flows, from 0.6m³ per hour to 14m³ per hour, creating deionised water streams with as little as five micro siemens per centimetre (µS/cm) conductivity.

The counter-current regeneration capability, complete with an intelligent monitoring system, ensures that new high levels of water efficiency can be met, along with low chemical usage.

Our EcoPure demineralisation/deionisation systems are some of the most efficient and cost-effective systems on the market, generating ultra-pure, ultra-low conductivity water with 30% fewer chemicals and 30% less water and energy use than traditional systems.

For larger outputs and flow rates of up to 60m3 per hour, EcoPure achieves conductivity levels as low as 0.1 µS/cm and silica levels as low as 20 ppb. With fully automated operation and intelligent monitoring, regeneration cycles are optimised, delivering a low total cost of ownership.

Bicarbonate (HCO3-) ions, more commonly known as alkalinity, can cause issues in food and beverage production and many industrial processes. Weak acid cation (WAC) ion exchange resin systems, known as dealkalisers, can be used to remove large concentrations of HCO3- in feedwater.

Alkalinity, through the presence of HCO3- ions, exists as a product within a chain of reversible reactions which start with atmospheric carbon dioxide (CO2) dissolving in water (see the table below).

Reaction 1 sees CO2 dissolving in water according to Henry’s Law. This law states that the amount of gas dissolved is proportional to the partial pressure of the gas in the atmosphere above the water. Rising temperature changes the Henry’s Law constant and reduces solubility.

Reactions 2A and 2B can be combined for practical purposes as carbonic acid (H¬2CO3) has such low solubility that it has little effect on the pH of the water. For simplicity, we can take the two reactions together to read:

H2CO3 is a weak acid and is not always dissociated. Unlike a strong acid, such as hydrochloric acid (HCl), the fraction of dissociation for a weak acid depends on the availability of all the components in the reaction; of these, the H+ concentration is the most likely to vary. At high pH, when the H+ concentration is low, the reaction is driven to the right, whereas, in an acid solution, most of the CO2 is maintained as a dissolved gas.

To remove alkalinity (temporary hardness) in water, we utilise a WAC ion exchange resin, exchanging H+ ions for the Ca++ and Mg++ ions that are associated with alkalinity. The scale-forming potential of the water is reduced while the pH is lowered. When the feedwater passes over a bed of this resin, cation exchange will take place until the number of H+ ions released into the water equals the original alkalinity. Additional H+ ions drive the reaction to the left and the pH falls. Reaction 2 then takes the H+ ions out of solution as it goes to the left; this is called buffering.

As a result of this process, CO2 gas is produced which can be liberated through treatment with a hydrophobic membrane or forced draft aerating stripper tower using Henry’s Law.

In effect, we have dealkalised or removed the temporary hardness of the incoming feed water. This process treatment may meet the production requirements needed for certain applications, such as beverage manufacturing. Other applications may need subsequent treatment processes, such as water softening, to remove the permanent hardness in the feedwater and protect low-pressure boilers.

Speak to our team of experts to discover how you could save money, increase manufacturing efficiencies and reduce costs with ion exchange technology. We conduct free assessments to identify how you can improve your water treatment and process filtration systems

We offer a range of ion exchange systems, each designed for specific applications:

EcoSave – Save up to 80% effluent water and 60% salt with EcoSave water softening.

Dealkalisation systems – contact our team of process engineers about your dealk water requirements. 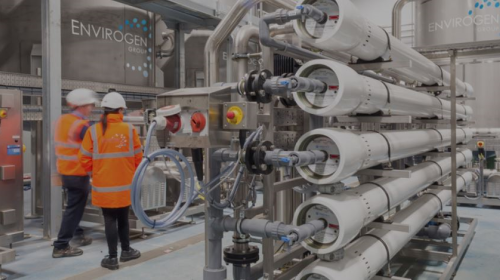 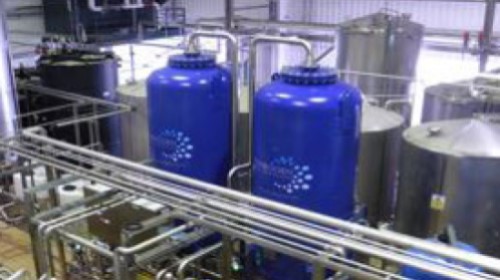 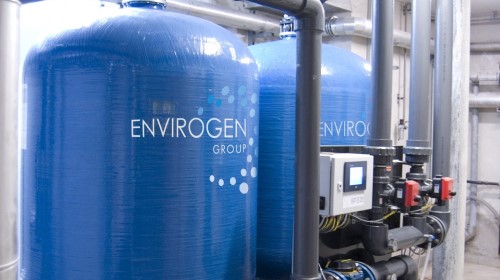 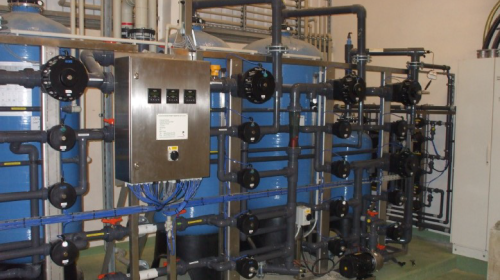 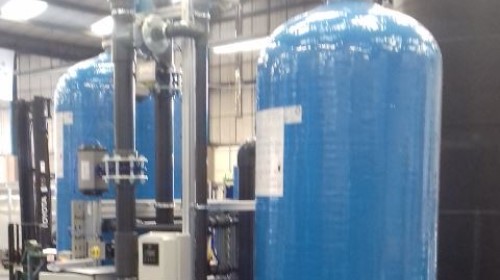 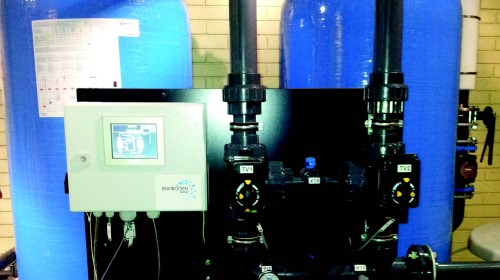 Speak to our team of experts to discover how you could save money, increase manufacturing efficiencies and reduce costs with ion exchange technology. We conduct free assessments to identify how you can improve your water treatment and process filtration systems