Viewing the impressive new endoscope reprocessing department at St Helens Hospital and learning how the technical group and its suppliers worked together to deliver a resilient, future-proof facility exceeding current design standards, it’s no surprise to learn that the trust is rated ‘Outstanding’ by the Care Quality Commission. Central to its success is a new duplex reverse osmosis water purification system. 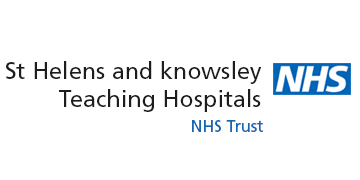 “An endoscope is a medical device and should be treated as such,” says Maggie Gilleeney, Decontamination Manager at St Helens and Knowsley Teaching Hospitals NHS Trust. “It’s all about providing safe scopes for patients.”

The forward-thinking trust began planning the striking department quite a few years ago. “Sue Dickinson, the previous Decontamination Manager who retired in 2021, stayed on longer to ensure everything was right,” explains Maggie. “Sue and joint Decontamination Manager John Howarth, who has also retired, were very much part of the technical team involved in the scheme.”

Maggie, who joined the department 12-years ago as a technician and was also a member of the technical group, explains: “It was a very intense period. The group met every week to get the department right. All the options were appraised and we engaged with a lot of suppliers to arrive at a solution which met our needs.

“We are remote from user departments, so scope turnaround times and efficiency were key factors in the equipment selection process. We specified resilience as part of our tender process.

“Future-proofing was part of the overall design with contingencies built-in. We’re now back up to pre-Covid levels, reprocessing 32,000 scopes a year across both the St Helens and Whiston Hospital sites. Due to demand, our volume is increasing by around 6% per year. So, that was built into the specification to allow for future growth.

“We designed the system with our RO system and washer-disinfectors in pods. So, if one pod fails, for whatever reason, we have the ability to continue to work.” 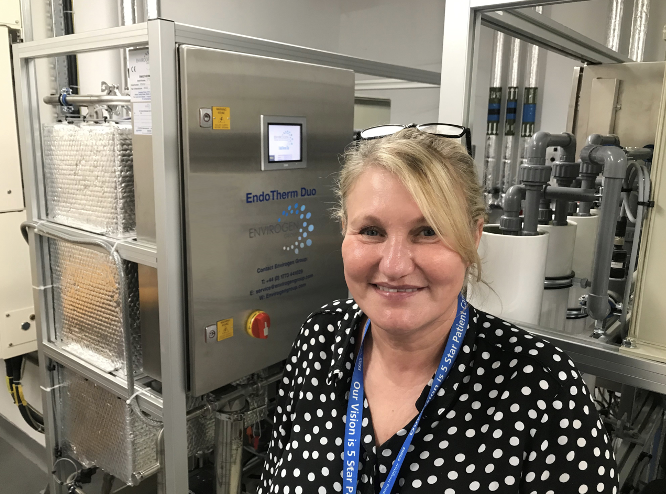 Maggie explains: “There are currently three separate areas where we reprocess scopes. When the new, centralised facility opens we will go to just one. That’s why we wanted to ensure the department will be able to support itself if we have any issues, by making the areas podded and future-proofing for growth.”

“Also, because of the distance we have to transport the scopes to our user departments, we were looking for an efficient process for transport turnaround.”

The detailed selection process considered a whole range of the equipment suppliers on the NHS Framework. The technical group chose Envirogen Group for the reverse osmosis water purification system and iM Med, the UK distributor of Steelco, for the endoscope washer-disinfectors and various supporting equipment and materials to provide a complete, one-source pathway.

As the scheme was progressing, the department’s existing Envirogen chemical sanitisation RO system, which was nearing the end of its operational life, was being maintained by the company’s service engineers. While iM Med had been appointed to service and validate the department’s old endoscope washer-disinfectors. “The service engineers from both Envirogen and iM Med are very efficient and proactive” says Maggie.

However, with the age of the RO system and spare parts becoming an issue, the time came to find an interim solution. For the last 18-months, this has been provided by three Envirogen EndoTherm Mini reverse osmosis hire units. Two went into the main endoscopy washroom, operating alongside the washer-disinfectors, while the third is in urology, which is on another floor.

“Since moving to the hire units there’s been no downtime,” says Maggie. “They just keep on going, doing their job.”

As for the scheme’s chosen RO system, Maggie explains: “We specified resilience for the RO. Envirogen came up with a solution to satisfy our requirements. We’ve always had duplex on this site. You always need resilience.”

Initially, the new department has two EndoTherm Duo duplex RO systems feeding 11 Steelco washer-disinfectors. However, as part of the future-proofing strategy, another EndoThem Duo and five further Steelco washer-disinfectors will be installed. “We may fit those earlier than we thought due to the increasing demand,” says Maggie. “The department’s been designed so that, when demand warrants, we can remove a wall and install the additional washers, bringing the department’s total to 16. There’s a ring main from the RO already installed to feed these further washers whenever required.”

“For resilience, the new department is currently split into two pods, with one of the duplex ROs feeding five washers and the other feeding six washers.

“In line with the requirement for resilience: in the event of one of the RO systems going down, the remaining working plant is capable of satisfying the demand of two of the ring mains. So, one duplex reverse osmosis water purification system will satisfy the demand of the current 11 washers. That added resilience was a key design criteria – not just duplex, but two duplex. Each of them capable of feeding all 11 machines.

“A third duplex RO unit will be installed to feed the additional five washers when demand increases. These will also be podded for resilience.” 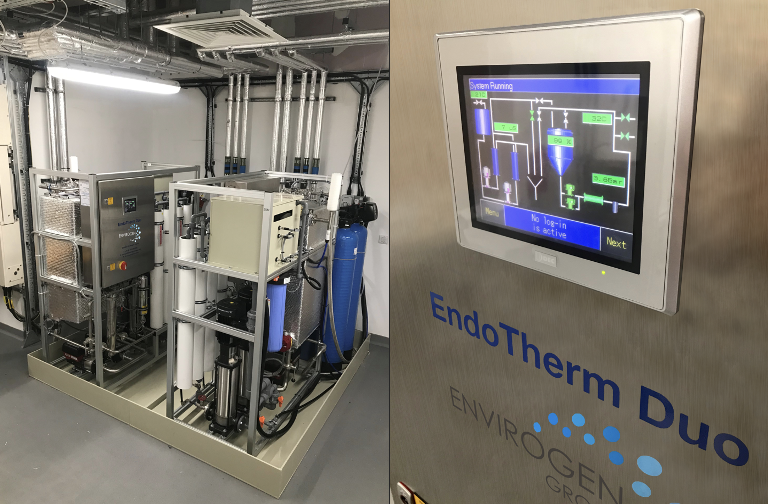 Allan continues: “The current two duplex ROs each produce 600 litres per hour – 1,200 litres per hour when running duty/assist mode. They are in a separate plant room and located in a bund, with a leak detector. The ROs feed two separate, orbitally welded high-quality stainless steel ring mains. The out of hours pre-programmed thermal sanitisation of the EndoTherm Duo units and their ring mains takes less than two hours to complete.”

“The third ring main is already installed in the ceiling. All that needs to be done is to connect up the tails and away we go.”

Allan adds: “This is a substantial centralised endoscopy installation and a significant scheme for Envirogen, and a continuation of our long-term relationship with the trust.”

The reverse osmosis water purification units can be set to operate at ambient or elevated temperatures and are user adjustable. They use a combination of reverse osmosis, ultra violet disinfection, sub-micron endotoxin filtration and constant recirculation, which all work together to maintain good quality water. The range of dispense rates can be matched to single or multiple decontamination equipment needs.

Speaking in the new centralised department, which is a fine tribute to the intensive work of the technical team, Maggie adds:

“I can’t sing the praises highly enough of both iM Med and Envirogen. The level of service we get is second to none. Decontamination is sometimes forgotten about, but the trust sees it as integral to the process and key to patient care.”